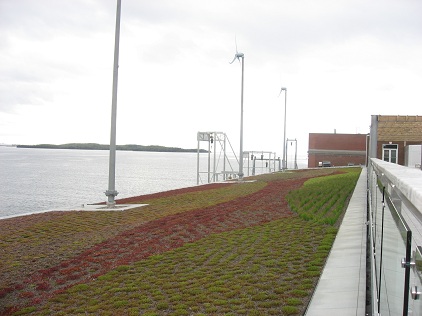 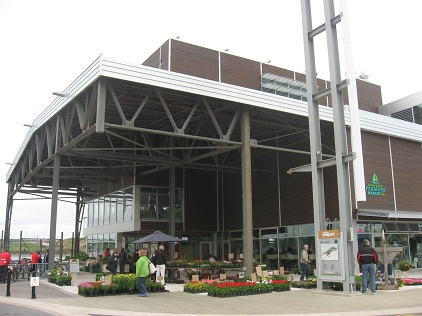 I was recently in Halifax with PPS where we started working on some design and operational improvements for their 260 year old Green Market, recently ensconced in its sixth location.
Now officially the ‘Hailfax Seaport Farmers Market’, it’s new home is a sleek LEED certified building (green roof, windmills, geothermal, noflush toilets, green walls inside, etc etc.).

Its a beauty alright and the portside location affords magical views of George’s Island and McNab’s Island – and with some judicious tweaking, more of the building could be visually opened to take advantage of the spectacular setting.
And the products (even early in the season) were really interesting i.e.; single malt whiskey aged in icewine barrels, pakistani fish curries, natural dyed woolen blankets, home remedies and tinctures, hard shell lobsters, piles of fiddleheads, baked caneles, dragon’s breath blue cheese, a really nice prelude of spring produce and a continuously stocked barrel of free empire apples courtesy of Noggins Corner Farm! With nearly 200 vendors it is not only one of the oldest – it is one of the biggest and best markets around. Its mostly a farmers market, with some handmade crafts (and beer, wine and spirits) – all being proffered by a surprisingly diverse, friendly and international cadre of producers.