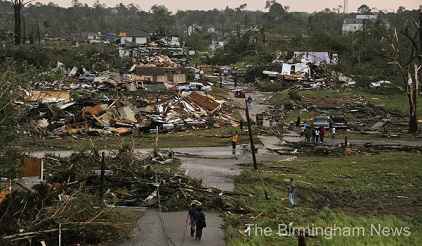 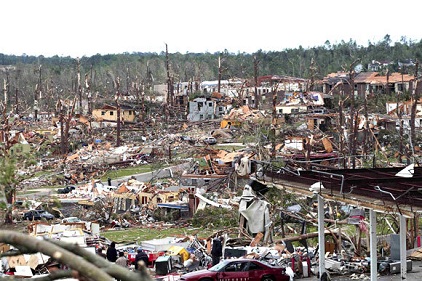 Over the last year I was working with PPS in Birmingham to set up a series of neighborhood markets and peddler routes to bring more fresh food into underserved neighborhoods.

Birmingham has one of the highest incidences of obesity and diabetes of any county in the US and now this….very very sad.

One of the worst hit neighborhoods – Pratt – was one of our favorite places where we had hoped to help get a community based market started. The photos show nothing but devestation.

Talking with Cathy Crenshaw yesterday (she started the city’s most succesful farmers market at Pepper Place) we learned that things are very bad indeed. Her Pepper Place Market has reopened as they were( thankfully) not hit by the tornadoes.

Maurice Bothwell who runs the Finley Market said they were spared – but hundreds of houses adjacent to the market were destroyed. The deadly swath of the tornados was random and precise.

The East Lake Farmers Market is reopening and serving as a drop off point for tornado relief and a much welcome gathering place for the still shaken residents.

My prayers go out to the people of Birmingham.