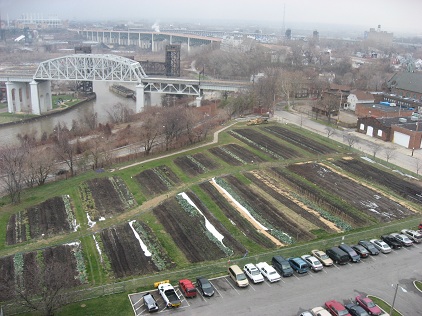 Project for Public Spaces chose Cleveland, Ohio today as the site for it’s next International Public Market Conference in the fall of 2012.
The backdrop for the conference will be the comeback city itself, with its cadres of new urban champions stoking a burgeoning food scene and —- drum roll please… the indubitably drop-dead-gorgeous West Side Market that will be celebrating its centennial in 2012.
I have been going to the market for nearly 25 years and am thrilled to see it get better and better. Cleveland has a real gem on its hands and the talented local neighborhood development organization – Ohio City Near West Development Corporation – has taken a keen interest in helping the West Side Market define and stimulate development in the surrounding commerical and residential area. It is all happening in the historic market neighborhood, abuzz with old time butchers alongside new storefront entreprenuers.

Bottom Picture – A new farm under cultivation adjacent to the market