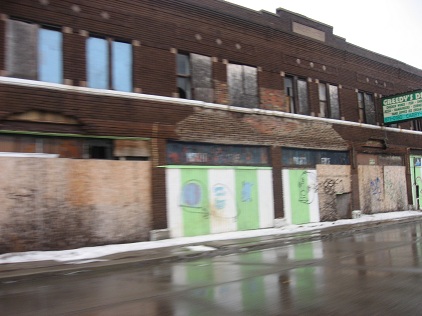 Detroit has many well documented ‘food deserts’ and a dearth of healthy food options in neighborhoods. I was in Detroit last week touring the city with Steve Davies from the Project for Public Spaces and Wendy Jackson and Laura Trudeau from the Kresge Foundation.
We were scouting out potential locations to restart local, storefront retail districts using a strong dose of healthy foods as the centerpiece.
Once beautiful commercial districts are now virtually empty of activity – and serve as a rough reminder to the residents that they indeed live in a food desert – all but abandoned by conventional retail.

Our goal is to use outdoor markets, farmers markets, little community gardens and small storefront start-ups to bring activity to the street and spawn a revival of neighborhood retail in places that have almost nothing.

We believe very strongly in working with local partners and residents to create the vision and help plan for their own futures.
Stay tuned – we were part of the team that planned for the reinvention of Detroit’s Eastern Market – now starting to really flourish again. It can be done!