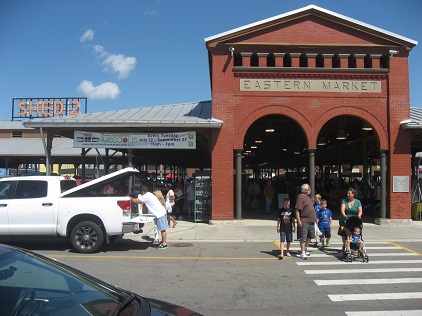 Detroit’s Tuesday Market is a Winner

Eastern Market runs 24/7 but most retail customers are drawn on Saturday when the six sheds are shopper friendliest. Now, Tuesday is providing an alternative for those who like to stock up mid-week and by the looks of the recent crowds, the Eastern Market Corporation has another success on its hands. The Tuesday market sets up in the recently restored Shed 2 – showcasing both urban and regional farmers alongside an assortment of startup food producers.
I was in Detroit doing some training with PPS – we did a short version of our NYC training class for Michigan market managers and organizers. As part of the class, we actually evaluated the Tuesday Market as a ‘place’ , an exercise that can be used at any market. The market is open from 11am to 7pm – and from the looks of it – they have a keeper indeed!