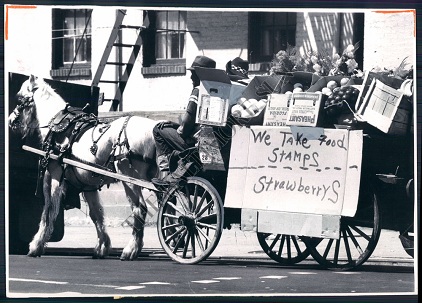 Hucksters - is it their time again?

You gotta love the ‘arabbers’ of Baltimore- old time hucksters who have been peddling in the neighborhoods for well, …ever.
Its great the way hucksters employ people from their neighborhoods, sell healthy food and activate street life with positive energy.
And now have you noticed that farmers can’t or don;t want to spend as much time ‘on market’? Hucksters are a natural part of market systems.
We are working on jumpstarting this sort of a system in Birmingham and elsewhere – and good old Baltimore has just kept it going.
The ‘arabbers’ have had some rough going, the city recently tried to shoo them away – but relented.
Seems they serve a lot of good and are worth investing in their future.