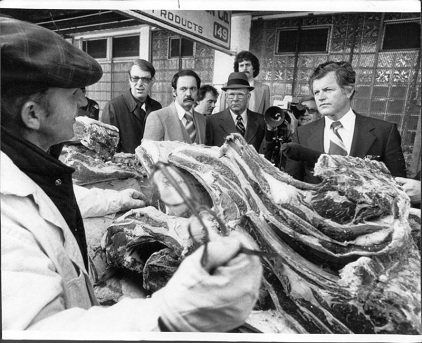 Teddy Kennedy at the Meat Market

Here is a newsphoto of the late Senator Edward Kennedy at the South Water Market in Chicago talking with Rudy Szumny from the New City Packing and Provision Company about the effect of trucking rates on food prices.
This photo ran in the Chicago Sun Times on February 23, 1978. So many of the old independent meat businesses have disappeared. But good news! – now appearing on the market horizon and in small retail storefronts – are glimmers of a renaissance in local butchers and meat cutters. Markets continue to provide a valuable stepping stone to retail development in storefronts.