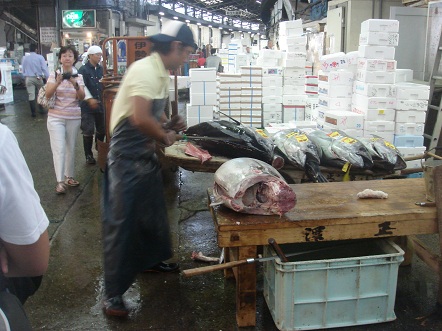 Tsukiji is the largest fish market in the world. Plans to relocate Tokyo’s vast and sometimes venerated market have been discussed for years. The latest argument contends the Tokyo Metropolitan Central Wholesale Market (東京都中央卸売市場) as Tsukiji is officially known, would be cheaper to move, than to fix. Seems a bit bunky to say its cheaper. obviously the land is worth more for others who would like to develop it to make some real money. Visitors have recently been discouraged also – perhaps those shots of slit tunas upset people, and it became too dangerous as the number of people increased. Seems a shame for Tokyo to lose the market’s historic character in the city for what – more fancy shops, condos and expensive offices?