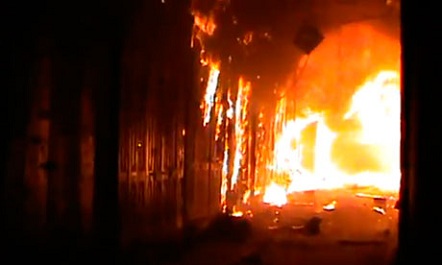 Al-Madina Souq of Aleppo, Syria was the world’s largest covered market – until entire sectors in the maze of streets and narrow alleyways were devastated by fire following a military operation launched by rebels last Friday. September 28th, 2012.

Al-Madina, dating to the 13th century, is not just one souq but dozens of specialised markets filled with hundreds of shops.

Some of these, at least until now, traded in delicate Indian silks, Iranian carpets and ceramics, or western designer clothing. Others stocked cheap plastic goods from China, embroidered caftans for men and women, spices, herbs, fruit and vegetables, and raw cotton harvested in the fields around the city.

Deep in the souq are workshops where artisans fashion copper and brass trays, furniture inlaid with mother-of-pearl and ebony, and soap perfumed with flower and herbal essences, Aleppo’s most famous export. Many shops had carved wooden doors that perished in the blaze – but thick stone walls and vaulted ceilings mean some could be restored.

In addition to shops and workshops, there are churches, mosques, Turkish baths, classical music academies, museums, splendid Ottoman mansions transformed into bijou hotels and restaurants, and inns. The most famous inn is Khan al-Gumrok, a 17th-century customs caravanserai, the largest in the old city.

At the western entrance to the souqs is the eighth-century Umayyad Mosque, rebuilt by the Mamlukes at the end of the 11th century, a masterpiece of Syrian Islamic architecture.

The massive citadel, a stone fortress looming 50m above the city, is said to be built on the top of the hillock where Abraham camped and milked his cow. Shelling in August damaged its arched entrance.

A city with a history stretching back more than 8,000 years, Aleppo, the western end of the fabled Silk Road which extended from Mongolia to northern Syria, has been a main trading hub for millennia.

Aleppo was the capital of the Syrian province of the Ottoman empire and its second city, after Istanbul. Aleppo was so well known in western Europe in the late 16th and early 17th centuries that William Shakespeare mentioned the city in both Othello and Macbeth.

In recent years, Aleppo was the clearing house for trade between Syria and Turkey, and its refurbished souqs became a magnet for tourists the world over.

The old city of Aleppo and the citadel are Unesco world heritage sites, while Aleppo was the Islamic capital of culture in 2006.