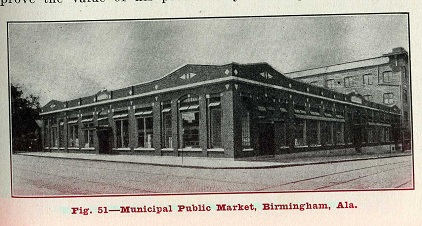 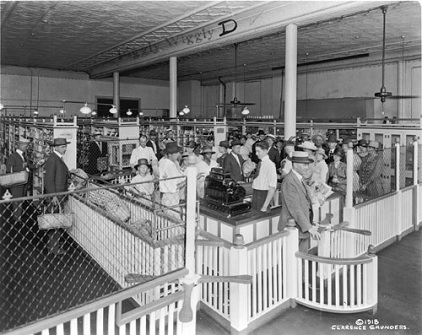 I never knew Birmingham (AL) had a Municipal Public Market and never heard anyone mention this place when I was there. I love Birmingham and have been there a few times over the last year working with the Project for Public Spaces and Main Street Birmingham to help build up a burgeoning market network and stimulate positive community activity. There are a lot of so called ‘food deserts’ in Birmingham, but there are ‘place deserts’ as well, and we are addressing them as one issue using the gathering power of markets as a natural first step to engage people and re-evolve commerical and residential ‘places’ that have been neglected and which form much of the basis of local self worth. There is a tremendous amount of momentum in the City of Birmingham and their recent Food Summit showcased just how commited and savvy they are.

Anyway – back to the photographs – the first two are exterior and interior photographs of the (now gone) Birmingham Municipal Public Market. And if you look closely at the interior shot of the public market you can see (towards the far right side) a signband over one of the stalls that says Piggly Wiggy. Could it be THE Piggly Wiggly, the pioneer of the modern supermarket industry? Its a little odd to see them in a stall in the public market. Wonder what they were doing there way back when? Today there are a few Piggly Wiggly supermarkets still operating in Birmingham and the ones I saw looked nice. Piggly Wiggly started in 1917 and pioneered the ‘checkout’ system seen in the bottom photograph – and notice the bin of baskets on the left side of the turnstile, to pick up when you go ‘in’ to the super market – no shopping carts yet – that innovation came later.

I forwarded these photos to my local contacts to see if they know more about the Birmingham Municipal Public Market. If I get any updates – they will be posted here!