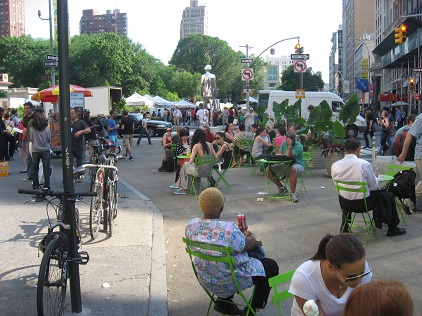 Yesterday – lollygagging around Union Square, I chanced upon this statue of Andy Warhol holding a shopping bag, all in shiny life-sized silver – as if he were about to stroll on over to the farmers market.

Back in 1979 when I worked in NYC for the inventor Stuart Pivar on his 100 MPG MICROCAR project – Andy Warhol used to stop by our office before he and Stuart went on one of their many thousand ‘shopping’ excursions to galleries, auction houses and yes, flea markets.

Those old NYC flea markets were great hunting grounds – and its nice to see the revival of quality flea markets in the city again. I have noticed recently a lot of the fleas are going with more food and homemade designery stuff, not so much collectibles and antiques.
Stuart Pivar (he also founded the New York Academy of Art) wrote a wonderfully short essay for the big Warhol sale at Sotheby’s entitled “Shopping with Andy” (google it) and in a city of world class shoppers, Andy was THE shopper – ever acquisitive, ever on the lookout – he needed warehouses to store all the ‘masterpieces’ he bought. He was a buyer and parted with little other than his own creations.

The sculpture at the tip of Union Square is called “The Andy Monument” but might be better known as the “Andy Moment” – its only up until October 2. Hope it pops up again somewhere soon- so more people can go ‘Shopping with Andy”. Weird and fun!