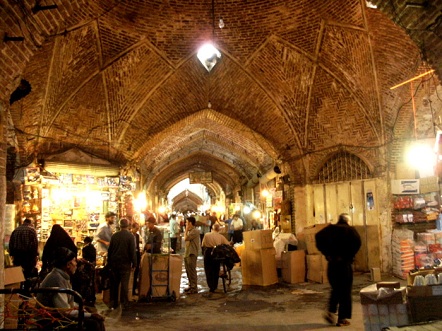 The Tabriz Bazaar in Iran is the first market in the world to acheive UNESCO status. This is from WIKIPEDIA:

An alley in Tabriz Bazaar devoted to carpet sellingThe Bazaar of Tabriz (Persian بازار تبریز, Bāzār-e Tabriz) is one of the oldest bazaars of the Middle East and the largest covered bazar in the world. It was inscribed as World Heritage Site by UNESCO in July 2010123.

Tabriz has been a place of cultural exchange since antiquity and its historic bazaar complex is one of the most important commercial centres on the Silk Road. Located in the center of the city of Tabriz, Iran, this spectacular structure consists of several sub-bazaars, such as Amir Bazaar (for gold and jewelry), Mozzafarieh (a carpet bazaar), a shoe bazaar, and many other ones for various goods. The most prosperous time of Tabriz and its bazaar was in 13th century when town became the capital city of Safavid kingdom. The city lost its status as capital in 16th century, but its bazaar has been being important as a commercial and economic center. Although, numerous modern shops and malls have been established nowadays, the bazaar of Tabriz has remained economic heart of both the city and northwestern of Iran4. It is worthy of mention that Tabriz bazaar has been being an important political place, and one can point out its importance in the Iranian Constitutional Revolution in the last century and Islamic Revolution in the contemporary time.

The bazaar is used for some important religious ceremonies. The most famous one is Day of Ashura while merchants cease the trade for about 10 days and religious ceremonies are holding inside the bazaar. Like other bazaars in Middle East, there are several mosques constructed behind the bazaar, where the most notable of them is Jome’ Mosque